United States of Activism: Why staying woke is more important than ever

Twenty-twenty’s social, political, and environmental events were felt worldwide, but US interpretation and response were truly unique. Each state differed in its response to COVID-19, was the epicenter of race relations in the shadow of the George Floyd murder, and raised eyebrows when it withdrew from and then rejoined the Paris Climate Agreement.

In the name of corporate activism, companies were eager to inform the public how they were managing the virus internally, how they would confront issues of race, and what they would do to confront their environmental impact.

After a volatile year, the American public was ready for them to fulfill those promises in 2021.

For an in-depth exploration of corporate activism, including the latest RepTrak data, insights, and recommended action items, read our full report here.

The unique social, political, and environmental landscape has created a very unified desire for companies to say and do the right thing in times of change. When so much of American life is rooted in its history and current relationships with its businesses (big and small), corporations have a renewed expectation and opportunity to demonstrate their commitment and responsibility to the public.

As we monitor the eb and flow of Reputation Scores by region, US reputation score is lower than its global counterparts. However, it’s seen a steady rise over the past few months, while other regions have decreased. 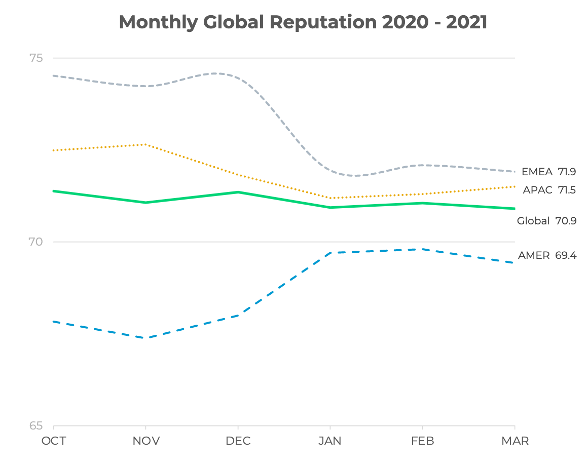 With the spotlight on the US response to global and local conflicts, US companies were eager to make public declarations quickly. And these gestures were welcomed by the American public. 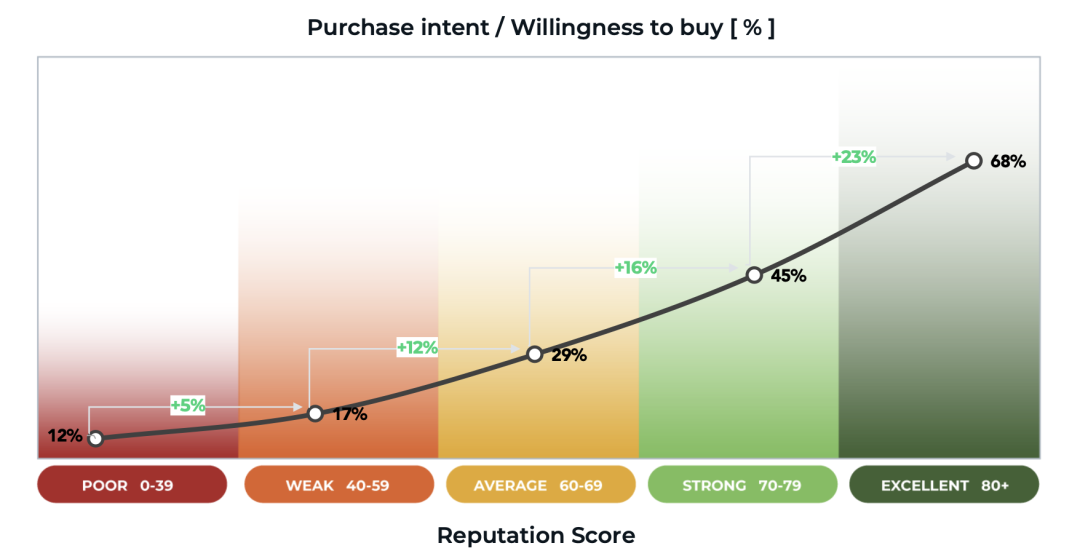 Americans also reported higher levels of trust and willingness to give the benefit of the doubt for activist companies – at nearly double the rate than those given to companies without advocacy.

This response is less surprising when 44% of the American public believe it is essential for corporations to provide both actions and words in response to cultural issues. Stateside, there is a demonstrated hunger for corporations to acknowledge both their power and role in the broader social, political, and environmental space.

But America’s relationship with corporate activism is complex.

Recently, 21% of the American public stated that they would rather companies do nothing in response to social and political issues – more than double the global rate.

Don’t hide behind that 21%. More than 80% of the American public and 91% of the global public are expecting you to do something. The vast majority of RepTrak data supports saying and doing the right thing is good for business – that’s why it’s our motto here at RepTrak.

RepTrak ESG data reveals that consumers are significantly more likely to purchase from and trust a company with a high ESG score. In fact, ESG is the most powerful indicator in determining whether or not the public is willing to trust a company and give it the benefit of the doubt.

This recent decrease won’t cancel out the long-term benefits of saying and doing the right thing. For many, these social, political, and environmental considerations have become overwhelming, and corresponding grand corporate gestures have become empty promises. Lead with relevant, timely, and effective action that don’t risk losing public trust and credibility. Then, provide regular communication on these efforts to keep your audience in the loop and demonstrate commitment.

To navigate this new landscape, it’s helpful to use a tool like RepTrak to track reputation in near real time, monitoring how your corporate activism efforts and communication impact your reputation and ESG perception and ensuring which efforts are having the right impact.

Companies that act in support of employees, communities, and consumers typically see a positive lift in their Reputation Scores. And in a time of social, political, and environmental change, saying and doing the right thing can make the difference — stateside and globally.

Retail: The echoes of 2020 are infiltrating 2021 reputation

We’re 23 months into 2020, or at least it feels that way. RepTrak’s reputation intelligence software is always on, so we’ve been able to meticulously track reputation evolution across industries, through 2020 and 2021 and heading into 2022. And while we saw some industries flourish under 2020’s unique circumstances (see Pharma), one industry surprised us in its downturn: Retail.

Retail reputation in down in 2021. Customers aren't just look

Retail reputation is down in 2021. We created some quick slides to illustrate why.